Five years ago, we received a volunteer application that was rather unusual. Instead of someone who came fresh from university, Gary had worked in consultancy for over 25 years. While he could be enjoying his retirement, he was coming to One Two… Tree! to work as a volunteer for children education in a far-away country. 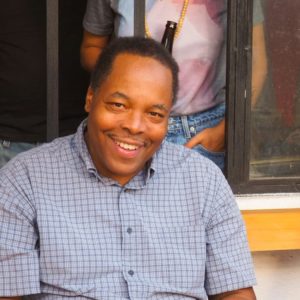 I met Gary a few months after he arrived to Nicaragua. My first thought (and everyone else´s first thought when they see Gary) was ´he is a peaceful man´. That first impression becomes even more certain after 5 years working with him. I never had an argument with him, nor I met anyone who did. In 5 years working with children, listening to parents, coordinating and helping young volunteers from all over the world, Gary always kept that good impression on everyone. He is, in one word, peaceful.

Most volunteers move into their own apartment after a few months living in a host family. Gary stayed almost three years living at Nardo´s house, one of the humblest host families in Diriamba. Every morning he would go for an early walk with Nardo. I don´t know how they communicated because Gary spoke little Spanish and Nardo didn’t know a word in English, but both became very good friends. Good volunteers use their time to dive into the local culture and become part of the community they´re in. Because Gary was such good example of this attitude, he became responsible for mentoring new volunteers when they arrived at the project. I am now thinking of how many young volunteers made the most of their experience in Nicaragua and Guatemala thanks to Gary´s advice.

Working on education does not allow you to see immediate results of your work. But when I think of Gary´s work on education, I imagine all those hundreds of kids who passed by his class and the impression that he made on them. How many of these kids will travel to another country after that first and only experience with a foreigner? How many found a job with that basic English they learned? How many changed their music habits, started dating a gringo or became volunteers themselves?

I started writing this post to say thank you to Gary. But it goes further, I want to be like Gary. We should all try to resemble him in our daily life. We need more Garys in the world.

Gracias Gary for being with us all these years. In the name of all volunteers, all children, all teachers and host families, Thank you.